The Alfa Art Center A NJ Non-Profit Corporation (a.k.a. Alfa Art Gallery) is a privately owned and operated art gallery in the heart of New Brunswick, NJ.

When Alfa was first conceived, it was to be a modern, high-tech, interdisciplinary gallery which would not only display conventional art but would combine music and paintings, and dance, and theater, and sculptures, and installations. It would strive to satisfy the community’s craving for art while taking advantage of high technologies and thus try to be unique.

We at NJ InfoTech were involved not only with the website but with the IT infrastructure as well – the HD projector and screen, surround sound, wireless microphones, wireless network, printers, copiers, scanners, and much more, but here we will just focus on the website.

A high-tech gallery, like the one envisioned could not exist without a modern website, which would feature not only static content, but video too, would look great and at the same time be easy to manage and easy to use, providing an exceptional user experience.

Our quest began with the design. After many hours of hard work we arrived at a product which we both liked (see image to the right). Then we implemented it into DreamWeaver templates, which would allow employees and interns without extensive knowledge of HTML and web development to make updates without any possibility of “breaking” the design. Another benefit of using DreamWeaver templates is that they could use the much simpler Adobe Contribute to make the changes, rather than DreamWeaver, which can be intimidating for the inexperienced user.

In addition we developed a custom CMS (content management system), to store and display event information in a consistent way, taking design considerations entirely off the shoulders of the person posting the information. All they would need to enter the event information into the CMS form and hit submit.

The gallery also needed a way to manage their mailing list and to send email announcements about upcoming events to large numbers of people. To achieve this we installed and integrated PHPList – a freeware open source email mailing list solution. 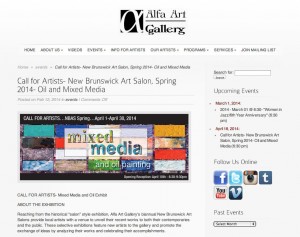 In 2011 CMS systems like Drupal, Joomla and WordPress had gained a lot of popularity. One of the biggest shortcomings with the old website was that even though DreamWeaver templates and the custom CMS we wrote eliminated the chance of “breaking” the design by mistake, it still meant the user had to have Adobe DreamWeaver or Adobe Contribute and had to download and upload files back and forth. This meant Alfa often had us do web updates for them, which was turning out to be expensive. A modern CMS system would take care of this problem, so we recommended that we look into it.

We initially began with Drupal, which we quickly found out to be not very user friendly and still required the end user to have a lot of HTML coding knowledge. Our next choice was WordPress and immediately we were impressed by the clarity of the interface and ease of use. It was definitely the way to go for this project and quickly became our personal favorite which we have been recommending to all of our other clients. 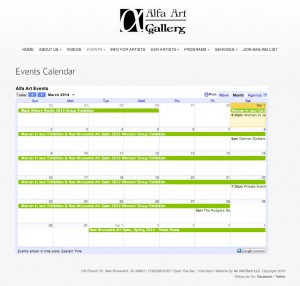 The WordPress theme we chose is SimplePress from ElegantThemes and we quickly ported the content over. That however meant a lot of broken links and since the gallery website had become very popular in the past 3 years, that would be a problem. We solved this problem by implementing 301 Redirection for all old pages to their new equivalents.

Another issue the gallery was having was that due to change in regulations and server settings PHPList was only able to email about 200 people at a time, which meant it had to be constantly monitored. Luckily the gallery is a non-profit organization so it qualified for a free VerticalResponse account. We successfully imported all data from PHPList and integrated the VerticalResponse sign-up form into the new website. 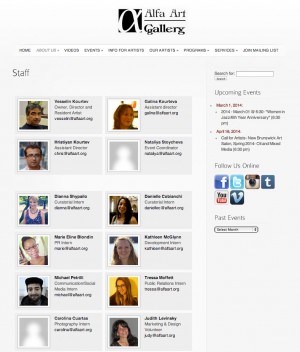 WordPress initially started as a blogging platform, so it has the ability to let visitors leave comments built in. Nowadays there are automated bots trolling the internet posting spam messages to unsuspecting websites. This is a small but annoying problem, which we solved by integrating the Akismet automatic post moderation system, which has worked beautifully.

The Alfa team was very impressed with our work and love their new website. The website is still hosted on our servers.